Three members of the Centre for Geometric Biology presented half-hour seminars as part of Environmental Microbiology Research Initiative (EMRI) at the University of Melbourne on Friday 21 July 2017. Jeremy Barr, Chris Greening and Mike McDonald all talked about their research journey to date and where they hoped to go next.

Jeremy described his work on bacteriophages – bacterial viruses that only infect bacteria – and how the high phage to bacteria ratio in found in mucosal surfaces, provides a layer of protection against bacterial infection (see below). 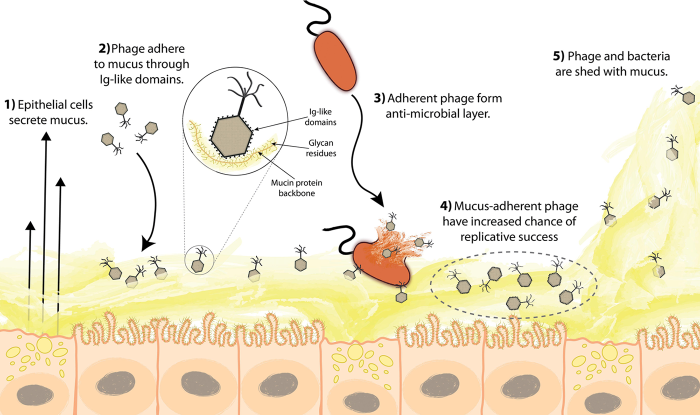 Jeremy also described experiments designed to explore how phages access other parts of the body. He and colleagues have found that phages can pass through epithelial cells in one direction and spread around the body. His work at Monash will investigate in more detail relationships between phages and their hosts. See Jeremy’s website for more details.

Chris’s research focuses on the metabolic strategies that microorganisms use to persist in unfavourable environments. He studies this in relation to three core areas: global change, disease, and biodiversity.

Chris talked about his discovery that microbes scavenge atmospheric trace gases such as H2 to meet their energy and carbon needs. He emphasised that most microbes are far more flexible than we realise and can utilise other sources of energy for maintenance (rather than growth). This in turn may explain the high biodiversity observed in extremely nutrient poor environments. See Chris’ website for more details.

Mike described how these approaches suggest that although evolution can be very repeatable, history and contingency are also important for some traits and that ecological and evolutionary changes occur on similar timescales, even in simple experimental systems. Mike is interested in the possibility that natural selection might be more predictable than previously thought and to develop experimental systems that can provide a greater insight into evolution in natural environments. See Mike’s website for more details.