May has been a busy month for the postgraduate students within the Centre for Geometric Biology. Not least with Amanda Pettersen graduating just before flying out to Sweden to begin a postdoc position.

Alex Gangur, who arrived from the UK in February of this year is immersed in pilot studies to help him design an experiment that will be central to his PhD research.

Alex is interested in how natural selection will play out in areas that differ in productivity. He is planning a large, long term laboratory experiment where he will manipulate food densities of a marine, harpacticoid copepod (Tisbe sp.) to provide environments that are able to support different numbers of copepod, that is, have different carrying capacities. Alex will then be able to track numerous life history characteristics, such as size, reproductive effort, age at reproduction etc, in the copepods over multiple generations.

To further fine-tune his experimental protocols, Alex wants to know if he can use chemostats to grow up his copepod populations rather than glass bottles.

The chemostats work by bubbling air up through the bottom of the chamber which, while an advantage in keeping waste build-up to a minimum, can have a downside as airflow can kill copepods if it gets in under the carapace.  Alex will monitor the growth of a population split between a glass bottle and a chemostat to see if they are the same and, if they are, he can go ahead and use the chemostat.

Lukas Schuster is approximately half way through his PhD candidature. He is currently running two experiments using one of the lab’s favourite animals; the colonial bryozoan Bugula neritina. Lukas is interested in how metabolic rate (a measure of energy use) co-varies with measures of survival, growth and reproductive rate. By directly linking metabolic rate to measures of fitness Lukas can measure how selection acts on metabolic rate.

In his first experiment for this field season Lukas is deploying newly settled Bugula on panels that are either hung horizontally – a benign environment for Bugula – or vertically; a harsher environment due to increased exposure to UV and sediments.

We know that the harsher environment tends to reduce growth rates, reproductive output and survival in this species, but what we don’t know is if, or how, selection on metabolic rates differs between these two environments.  Every 2 weeks Lukas collects his panels from the two environments and brings them back to the lab where he measures colony size, growth rate, survival, and reproductive output (number of ovicells) as well as metabolic rate for each of approximately 400 individual colonies.

Lukas has another 1,000 colonies in the field that he is monitoring fortnightly for a separate experiment. In this one, Lukas has taken a field populations of Bugula and measured metabolic rate for every individual colony. He then selected colonies with low, high or intermediate metabolic rates so that he has effectively created new populations that have different mean metabolic rates. At the same time, he is manipulating densities so that he will be able to tell if it is population density or metabolic rate that is having an effect on the growth rate, survival and reproductive output of the Bugula colonies.

Hayley Cameron is in her final year of her PhD and is following up on earlier experiments. Hayley is also using Bugula neritina as a model species to test some fundamental theoretical ideas. Hayley is interested in the outcomes of maternal investment. She is spawning Bugula in the lab and then choosing big, small or intermediate larvae to settle and create populations of siblings that differ in mean size. Hayley wants to know if it is better to produce a few, larger, offspring, or more, smaller, offspring when they have to compete with their siblings (which many marine invertebrates do).

Hayley has returned her populations of different sizes to the field and every week measures size, number of ovicells and survival for each of her 300 individuals. She has been doing this for 9 weeks so far, but will continue to track each individual’s performance across their entire life span (probably a matter of months). In addition Hayley is spawning her colonies in the lab when they are reproductive because she wants to know what size offspring they make.  Will the bigger offspring do better, even when in competition with their siblings and, in turn, make bigger offspring themselves? Watch this space. 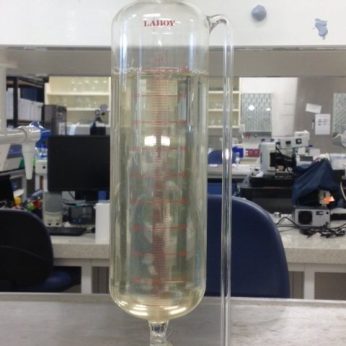 Alex will use a chemostat to grow his copepod populations.

One of Lukas’ Bugula plates 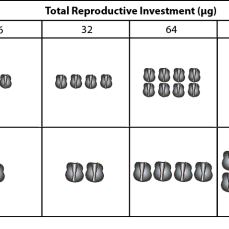 Hayley has created populations of siblings that differ in mean size. Will many small siblings do better than fewer big ones?
Posted in Research, Student news