Many fundamental questions in biology begin with estimating the rates of underlying biological processes. In order to do this, biologists will often reduce environmental complexity by holding some variables constant so they can estimate monotonic rates, which are used in subsequent analyses.

There can be problems with these estimates, which are usually undertaken using linear regression. Often the biological rates have to be estimated from non-linear or noisy data where inclusion of the entire time series can conflate the biological rate of interest with undesired effects, while ad-hoc methods to select the linear portion of the data tend to be subjective and non-reproducible.

Colin Olito and his colleagues from the Centre for Geometric Biology have developed the LoLinR package for R to provide a suite of simple functions to carry out local linear regressions to estimate monotonic rates from time series data. Importantly, the workflow and methodology they have developed provides a statistically robust and reproducible approach to estimating monotonic rates from noisy time series data. 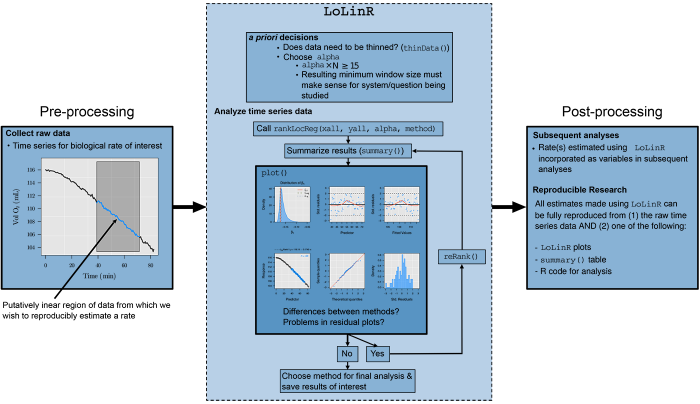 The diagram above demonstrates how a typical workflow using LoLinR to estimate biological rates would fit into an experimental project workflow. In this example, oxygen saturation data are being used to estimate metabolic rate for an individual sea urchin. The linear region of interest occurs after equipment calibration, but before the sea urchins begin to show physiological responses to declining oxygen. Crucially, any estimate made using LoLinR can be easily reproduced using two pieces of information:

More details and the LoLinR package can be found on Colin’s GitHub repository.

Further examples and code are available via Colin’s website.

This research was published in the Journal of Experimental Biology.